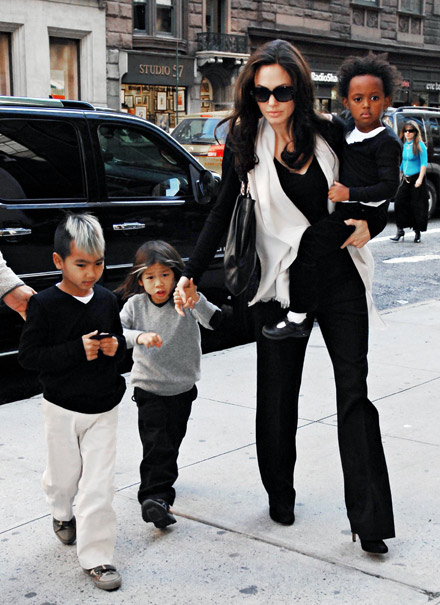 Angelina Jolie was in New York last Saturday with her adopted multi-cultural familia. Culture would be the right impression, they were going into Lee’s Art Shop. Angelina Jolie was also in town to promote her part in the Clint Eastwood directed The Changeling. She plays a mother who’s kidnapped kid is returned home, problem.. it’s not her kid, but no one believes her.

She spoke to MTV about the role.. 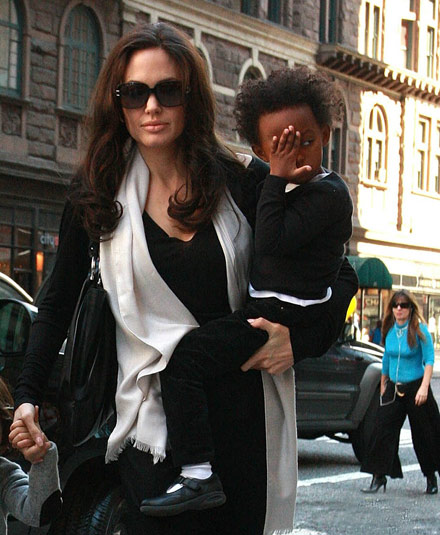 “I have a big busy family. I’m a mom and a lot of other things in my life. And I’m an actor, and I love telling stories and I like expressing emotion to try to connect with other people. With this story, I’m so curious to hear other mothers’ reactions. I think it’s a film that many people can relate to.” 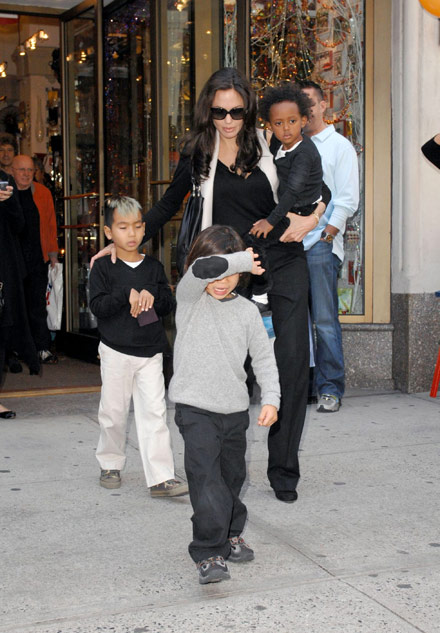 “I never like to watch myself ever. I still haven’t seen “Wanted.” I heard it was fun. I feel like I did something right if I can watch something and feel removed enough. I can watch this movie. I’m proud of this. I think it’s a really beautiful film. You’d have to ask Brad, but I think he likes this one.”

Just like I suspected: Angelina took Wanted for the check/relevance reasons. Hey, as long as Beverly Hills Chihuahua movies are bringing in $30 million, while Spike Lee spent all kinds of time and energy on Miracle at St. Anna, made $5 million, and is already out of the top 10, she’s got to take that ride.

So sue me for being critical but….someone please do that baby’s hair. Also shes quite old enough to walk now…Put her ass down and let her walk. Actually on 2nd thought wtf is up wit all them chil’ren’s heads….smh…it’s a damn travesty

Steph
White people can’t do black peoples hair so you have to excuse Angelina on that front but I do agree, what IS wrong with ALL those kids hair?

I hear you Jill…but she got mo’ money then God and can afford a stylist. I mean honestly is that style cute or appealing to her?

Steph
You are right about her havng the money but maybe, for some reason, she does think that style is nice.

I’m glad I’m not the only person who was thinking that.  That little girl is old enough to walk and she either needs to learn how to do her hair or find someone who can.  Does she not know how much that angers people to see her hair like that?

MsMoni,
Seriously? I mean really? “Does she not know how much that angers people to see her hair like that?” If you get “angry” because of how a celebrity styles her child’s hair then I’m sorry, but you need a f**king life.

who cares about what u stupid say….i love her family and herself. so if u have nothing else to do stop talking about her that way and go scratch your ass…she does a beautiful job in taking care of her kids so mind your own business. and look at your own hair and family.