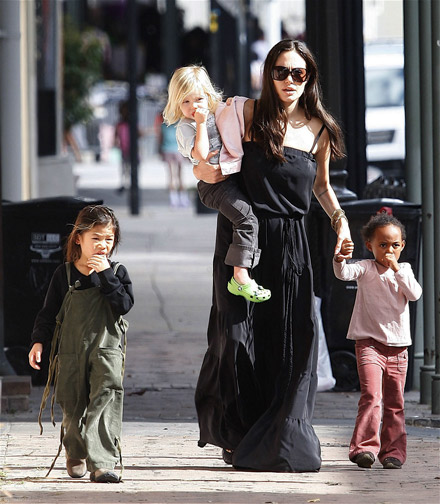 The four rarest words in the English language are .. “I love my job.” Name your dream job and you’ll find someone who has that job and can’t stand it. Early this month, Joaquin Phoenix quit acting to become a musician. Now, Angelina Jolie says she is leaving Hollywood too.

Last Thursday, in an interview with the BBC, Angelina Jolie said..
“I don’t plan to keep acting very long, I’m ready to do a few things now and fade away and get ready to be a grandma one day. So maybe it will be once a year and then maybe it will be once every three years, and then just naturally *poof* - I like being home a lot these days.” That *poof* was a creative touch..

In 2009, Angelina Jolie will star in the movie adaptation of the Ayn Rand classic Atlas Shrugged and one other film, The Mercenary,  when they wrap, the fade begins.

Don’t think Brad Pitt is going to join Angelina on that couch; somebody has to keep those seventeen kids above the poverty level.

I see she put zahara down for shilo…but that chile still got a nappy head….ughhhhhh why won’t Jada reach out to her!!! lol…I digress

May12Serdna   I ralely like Angelina, she’s hot, but in the other hand I think she doesn’t know what she’s doing, would it be that she’s looking for redemption???lol