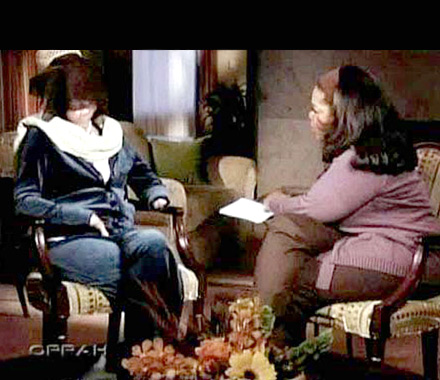 On February 16, Charla Nash drove to a friend’s house in Connecticut for what she thought would be a somewhat easy situation to resolve. Sandra Herold called Charla for help with her chimpanzee that was running wild. When Charla got out of the car she found herself in front of an enraged - and soon to be discovered - drugged chimp that literally ripped her face off. Charla Nash survived the horrific attack.

Oprah was able to convince Charla that people want to see the damage the chimp did to her. This afternoon was the big reveal.

Face-off is not a play on words. Charla no longer has one. 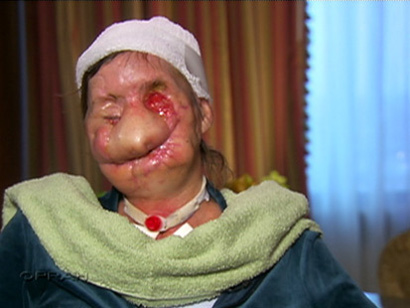 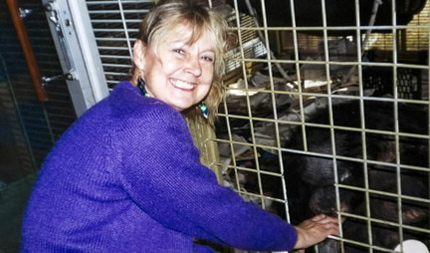 This is the face she knew (and loved).

Of course she’s suing for many millions of dollars.

I initially thought this was a horrible self-serving publicity move by Oprah, but Charla Nash not only agreed to appear on the show (didn’t have to,) Charla concluded the interview with a don’t feel sorry for me message for people unsure how to react to her injuries.

“I’m the same person I’ve always been. I just look different. You know, and there’s things that happen in life that, you know, you can’t change it. You know, it’s a tragedy.”

To say she’s a strong woman is an understatement.

Tagged: Movie and TV StarsOprahWhat’s That?

That is so sad. Keep the faith!! God wanted you to stay around just a little bit longer. This should be a wake up call for anyone who thinks the same thing or something similar can happen to them. You may not have those good looks all your life, you should appreciate your life more for what its worth. God bless you all!!!

Ohh gosh…. but Jamelle… her personal life is ruined…. who will admire her…. who will go out with her…... would she herself be able to go out on a public place :-(
I hate God sometimes :-(
I wish if docs could give her face back back by some surgery :-(

wow i feel bad for her. and i agree with both of you jamelle and deepak, even though her personal life might be ruined she still has her dignity. i hope she can get better!!

I feel sorry for this women but when are white people going to figure out that animals are not humans, they are ANIMALS! So these types of things are going to happen.

Deepak= I understand where you’re coming from but don’t hate God for ANYTHING!! Just remember that everything happens for a reason…
Oprah, I didn’t need to see that by the way!!!!!

I agree with you “Damn!!!” and we black people also need to realize that pitbulls and rockwilders are just as dangerous and prone to such vicious attacks.

Mario is a white boy, don’t let his white ass fool you.

how the hell did a story about a woman with her face ripped off turn into a racial discussion?? seriously?? lady was just helpin out her friend because she asked for help, right?? so, being ignorant about wild animals being violent is white…..so helpin out your friends is white, too…..right?? dumb ass. i do agree with that guy about the pits, though. you don’t take an animal made with jaws of steel and get all surprised when he bites your ass. you never hear about white pit fighters….blacks got that market cornered!!

this story’ll make me think twice the next time i gotta friend who needs help getting a cat out of a tree or talkin their dog out from under the house…i tell ya that!! hump that!!

OMIGAAAAAD! I CANNOT BELIEVE THAT HAPPENED TO THAT POOR GIRL!!!! But still, I WOULD sue the people that owned the animal (yet im pretty sure they would have already anyway) And, frankly, you guys act like its the chimps fault, when really, chimps are fighting for their lives!!! they are extinct in 13 different countries, and i WANT them to live..PLEASE save the chimps.

Jaynette….I was agreeing with your comment about “how did a story about a woman’s face being torn off turn into a racial discussion.”  I was there with you until your discussion reverted into a racial attack.  You counteracted your point.  Disappointing!!!

THAT IS REALLY SAD AND I HOPE SHE GETS EVERYTHING SHE ASKING FOR.PEOPLE NEED TO STOP TRYING TO OWN THESE ANIMALS THAT ARE WILD AND DANGEROUS.PEOPLE ACT LIKE THEY NEED TO HAVE WILD ANIMALS YEAH SOME ARE BEAUTIFUL BUT IS IT WORTH POSSIBLE GETTING KILLED OVER.PEOPLE ARE JUST SO DAMN STUPID STILL.

Just so you all know the chimp was on antidepressant pills it’s not like the owner was just giving him pills for the fun of it. Deepak she been in the hospital since the attack so i don’t think a personal life is what she cares about right now and she still has her daughter.

Sorry it wasn’t antidepressant pills it was a anxiety pill

“Ohh gosh…. but Jamelle… her personal life is ruined…. who will admire her…. who will go out with her…... would she herself be able to go out on a public place :-(
I hate God sometimes :-(
I wish if docs could give her face back back by some surgery :-( “

How can u hate GOD

How can you hate god?  Because if you believe he is the cause/has a plan for everything, then this is his doing.

But really, how COULD you hate god?  He’s imaginary, and things that happen are a product of your decisions.  She chose to be around this animal.  While it is terribly tragic what happened to her, and she seems totally undeserving of such a bad thing, it’s silly to blame something like this on god.  don’t hate god, hate the people (like the chimp’s owner) that doesn’t have common sense.

Damn!!! well we thought you black people were animals im guessing from what you said you are??

she was so pretty. Let me just say this. You are a brave woman.

This poor woman. I truly hope they can do more to help her. While I’m not sure how this comment section turned into such a discussion on a variety of subjects. I feel the need to state to Fate, that I do believe in God, and Jesus. And if I happen to be wrong….I lose nothing if it turns out I will only “rot in the ground.” However, should I be right, you have much to lose.

The owner died… so there,

Wow, I know I’m a late comer on this one ....but….First of all, I do not like MONKEYS.  People try saying they are our ancestors…HA! NOT!  Would any sane human being just rip someones face off for the hell of it?  And as for the drugs given the chimp, they were not necessary for it to attack.  One day the chimp was gonna go ballistic anyway.  THEY ARE WILD ANIMALS, PEOPLE!!!  I have mad respect for Charla for deciding to educate people about her chimp attack.  But Oprah….we really did not NEED to see Charla in such a vulnerable light.  Ratings aren’t that important. Now that her friend is dead who owned the monkey, what will become of her lawsuit?  Ya know, people just did not NEED to know this stuff.  Seems to me Charla’s story is just getting worst.

Heaven above will guide and correct her flaws. She will have constructive surgery and pray she will love herself enough to know how loved she is. How lucky she did not die. Horrible things happen in life and there is a reason. Maybe you all should take a good look at yourselves. Our skin is only a shell for what is inside us. Treat all other humans like they are your loved family and be respectfull of any choice they have taken in life. There are consequences for our decisions. Then we must live by Gods Rule. Do unto others as you would have them do unto you! This is a really beautiful person who has a rough time again and at least we could do for her is to pray she can come throuh and have some quality of life.  This is for real folks.

She asked for people NOT to take pictures of her face!!

thats soooooooooooooooooo sadddddd!! she doesnt diserve that! its not her fault! its her friends fault for calling HER to come help when her friend really should have just stayed away and NOT call charla for help!:((((((((((( Charla if someone tells u about this message they will tell u that i said that u wer soooooooooooooooo beautifulll!and u still are on the insideeee! and forever god will hold u in his arms and tell u he loved u enough to keep u alive:)and that u r still a person with people that love u very much and stick by ur side through THICK and THIN!:)

GOD BLESS U CHARLAAA!:D
peace
love
and Harmony shall b with u!:)

u know they really shouldnt let people have a monkey as a house pet!!:( pooorrrr charllaaaa!:(

What is a ROCKWILDER?

u mean a ROTWHILER?? idk how to spell that!!:) haha

“Everything happens for a reason” says Jamelle…and the “reason” for a person being violently attacked & having their life ruined is? The “reason” this happened is simple…a powerful animal attacked her, that’s it…there’s no moral, no lesson, nothing.

To suggest that murders, rapes & tragic accidents such as this happen “for a reason” is not only complete nonsense, it is also an appalling judgment to make because it suggests that the accident was somehow “destined” to take place.

Stop attributing life’s events to some fairy story man in the sky & see things as they are & have some compassion & maturity.

Horrific things are done by humans every hour, every minute… with premeditated thought and sometimes without.
Another animal, not too unlike ourselves, did something awfully wrong.  I believe this is known by anyone close to the incident, including the person who is suffering and still alive. It’s tragic, like any incident.
Perhaps drugs played a part; coupled with other human/animal fears or insecurities.  Please do not disregard the human need to learn, love, protect and tend. That’s not wrong and should not be abolished. being cautious should be gained ... and protecting most surly should not go, but stay open…please understand this. She loved that chimp and he loved her like a mother. 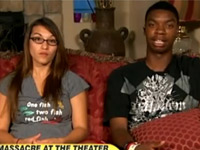