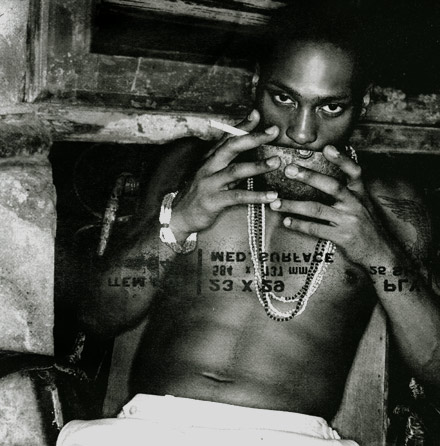 Have you ever wondered what caused D’Angelo’s shocking weight gain and drinking/drug problems that drip into the news every now and then?

In this month’s digital Spin magazine, D’Angelo’s former manager and associates give the goods: he was angry and depressed that women were drooling over his body and not his music.

Dominique Trenier was D’Angelo’s manager. After Brown Sugar he wanted to reshape D’Angelo’s image to better cater to a female audience. Just like female singers are encouraged to show more skin and slip into skimpy outfits to skyrocket their popularity, Trenier convinced D’Angelo to get in shape and lose the shirt. It works >> think 50. 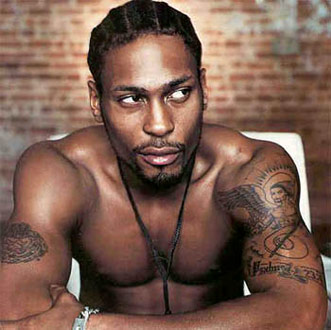 Trenier..  “Initially to him, it seemed completely bonkers. He didn’t quite get what I was saying. he kept going, ‘What do you mean, naked? ..
You’ve got to realize, he had never looked like that before in his life. To be somebody who was so introverted, and then, in a matter of three or four months, to be so ripped-everything was happening so quickly.”

“How Does it Feel” proved Trenier right; D’Angelo gained a huge number of new female fans and locked down the old ones. One listen to Voodoo also reveals D’Angelo’s artistry - his love of music and pushing boundaries. But the new jack fans, in love with him because of the video, had no interest in his artistic babble during concerts.

Take off your clothes! 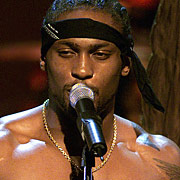 Roy Hargrove..  “We couldn’t get through one song before women would start to scream for him to take off something. It wasn’t about the music. All they wanted him to do was take off his clothes.”

The catcalls had an undeniable effect on D’Angelo. “He’d get angry and start breaking shit.” says Questlove.. “The audience thinking, ‘Fuck your art, I wanna see your ass! Made him angry.”

As Trenier put it, D’Angelo “isn’t a sexy dude” but a “real musician who wears glasses and plays video games,” objectification appeared to do lasting damage.

His tour manager, Alan Leeds added.. “I didn’t realize how vulnerable he was and how deep his issues ran. He’s cursed now with fretting over how much of his fan base is because of how he looked as opposed to the music. It took away his confidence, because he’s not convinced why any given fan is supporting him.”

A friend’s suicide and ego problems in the studio didn’t help either.

After going through a rehab process at Eric Clapton’s Treatment Centre in Antigua, D’Angelo is reportedly back in “martial arts” shape, and tucked in the studio, working as we speak.

The album is slated for a Fall/Winter 08’ release on J Records.

This is an amazing article and very eye-opening. My only concern though is that I doubt this industry will ever accept an overwieght male crooner in a sea of Omarion-Chris Brown-Usher abs and pecs. Not that it justifies sacrificing your gift for sex appeal, but the industry knows that lust runs the market and if the public can’t lust after you, they don’t want it. such a sad thing…but it’s reality.

that makes me sad.  There are so many wonderful artists out there with REAL talent that get slept on cuz some girl or some guy who can’t sing is nice to look at. In my opinion D’angelo had it all, but if you’re not a vain person, I guess living in this materialistic world will take its toll on you.  Hopefully he comes back strong.  His music was great!

I am sorry, if I were making the money that he was making and women were screamin take off your clothes I would do just that. I don’t understand why he got all depressed over that. That was a small price to pay for all the fame and fortune that he would have continued to have. Hopefully he can get over that and get back on stage and do what he does best. And that is satisfying womens fantasies and putting out great music.

I love D’Angelos music, his voice is just Amazing!His music inspires me i listen to “VooDoo” every morning i wake up! The reason i listen to him so much is because he’s a REAL BLACK MAN! His voice n Lyrics is like breath takeing to me!

As a recovering drug addict and an artist I can relate to Dee completely. It takes someone who has some experience in these matters to understand. We who suffer from life are very sensitive to it. That just the way it is. We all have problems to bear. Dee just happened to be in public spotlight. He would probably have to deal with his emotions and feelings regardless of the video. People should understand that we all are sensitive to something. In my opinion that sensitivity is a god given attribute given to us to help each other but society tells us that we are weak and that are character assets are actually a character defects thus causing one to feel inadequate

i agree with “recovering’s” comment, and I frankly do not care what D’angelo looks like (although he was a good looking man), as long as I can here his amazing voice for the rest of my life. I’m like literally grasping on to what little we have left of his music (Brown Sugar and Voodoo) because i remember my dad always playing it as a kid, and now i appreciate it more out of nostalgia and because his vocal range and musicianship is absolutely astounding and irreplaceable. so if he ever by any chance reads this, i hope it’ll spark his motivation to come back to music and bring his raw talent with him (and don’t change a thing about it), because at this point the art of music is near death.

IMO Being a sex symbol didn’t wreck D’Angelo’s life or career- Youtube the video D’ANGELO MARK JENKINS VH1 and you’ll see some sexy images in there. This man’s first hit was BROWN SUGAR and it definitely wasn’t about the type you pur in coffee or tea [more like weed/ganga/ marijuana]. I love D’Angelo and he’s obvously a gifted musical prodigy. HOWEVER it seems to me like he had some underlying issues BEFORE he lost the weight and changed his image into a sex symbol. It seems to me that maybe his weight issues and drug abusw are underlying problems he’s had from his youth and it went out of control in his early adulthood .Anyhow come back D’ANGELO-WE LOVE YOU!

Love D’Angelo ’ s Music, Artistry and style of expression Gifted and Talented! Reality is people love him for his looks their interpretation of what his make up is, he knows who He is and what he is capable of doing with his Music, Accentuate this and Continue to give to the World what He is Great at - His Music!