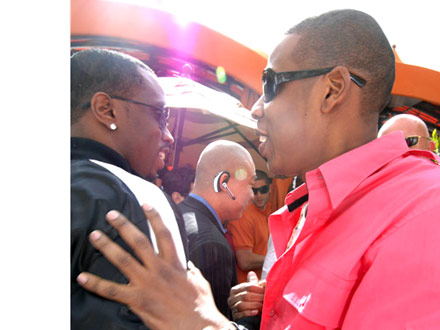 Jay-Z’s American Gangster is his second post-retirement album, it also marks Diddy’s return to the production booth. Through osmosis with The Hitmen, Diddy contributed six songs to the album; The Hitmen were a big part of Bad Boy’s sound during its heyday.

Jay-Z and Diddy told EW how that super combo came together.

Diddy: When I heard he may make another album, I was like, ‘‘You need to let me executive-produce that album! Even Ali had a coach. Jordan had a coach. That’s what I do best!

Jay-Z: Puff gave me a call [in early September]. He’s always talking about ‘‘Let me executive-produce an album.’’ And I was always like, ‘‘Man, I’m a boss in my own right. What are you talking about?”

Diddy: We have competed with each other over the years. But I was like, ‘‘I still want to be involved in the project.’’ He told me he had the concept of blaxploitation with a contemporary sound. I said, ‘‘I got a bunch of those [beats].”

Jay-Z: He’s like, ‘‘You gotta come by, man — I’ve never asked you to come by the studio ever.’’ That night, I went over, and he had all these lush arrangements. I’m like, ‘‘What are you doing with all these?’ He’s like, ‘‘I don’t have anyone to give ‘em to.’’ And that was the foundation for the sound [of the album]. I was surprised from the source — you forget that, with all the things he does, he’s a producer at heart.

Diddy: After working with Biggie, Mary J. Blige, and Faith Evans, there wasn’t a lot of artists who inspired me to put time in and really grind out in the studio. [But Jay and I] were just two artists in there, and the vibes just fit. He must have finished four songs in a weekend’s time.

What stuck with me was Diddy’s line about not having anyone to give his beats to.

He’s down South messing with Yung Joc and Gorilla Zoe, for sure they aren’t gonna be using any Hitmen beats. Are there really no rappers in New York? How about the original Band? Haven’t heard from Babs or that Philly kid, Ness.. since the season finale.

I find it hard to believe they - especially Babs - can’t come up with something. 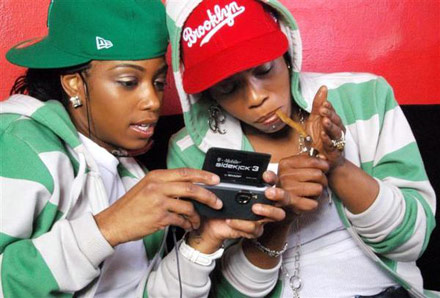 i’m sorry….but for real…most of the things puffy lets come out of his mouth are a joke. he doesn’t have anyone to give his beats to….

first of all….they’re technically NOT his beats. i can’t stand people who call themselves producers that actually never touch a keyboard.

second…how many groups have made BadBoy a rest stop in their career and came out with less gas then when they started? Danity Kane, Da Band, Faith Evans, Carl Thomas, Cheri Dennis, Dream, 112, need I go on? Plenty of those artists could’ve used those type of beats…

HE’S COOL,BUT DATS IT. I’VE NEVER PURCHASED ANYTHING HE’S EVER HAD OUT, EXCEPT BIGGIE.

Y DO U THINK JAY WAS HESITANT, AND PUFF WAS BEGGIN, I AGREE, PUFF COULD HAVE GOT ANYBODY TO USE THOSE BEATS.

THE WAY I LOOK AT IT, IF I WAS SIGNED TO BAD BOY, I WOULD HAVE TAKEN THAT STATEMENT OFFESNIVE.
THATS BASICLY SAYIN, HIS ARTIST AINT SHIT!

I THINK JAY EVEN TOOK IT DAT WAY, LIKE WHAO, DAMN DUDE, U GOT ALL THESE ARTIST, AND CANT PRO-ACTIVELY USE THESE BEATS????

JAY IS SMART ENOUGH TO KNOW, IF HE WSNT FEELIN IT, HE WOULDNT HAVE RECORDED. IF YOU EVER SEEN FADE TO BLACK, JAY WILL SIT IN DA STUDIO FOR HOURS TO GET DA RIGHT TRACK, HE WONT RECORD OVER JUST ANYTHING, HAS TO BE PERFECT, LIKE ITS HIS FIRST, LIKE ITS HIS LAST!

AT THE END OF THE DAY…IT’S DA ROC, BIT-CHES!

REMEMBER THIS???...
“ITS JAY ALL DAY, NO COMPRAMIZING, NO COMPASS COMES WITH THIS LIFE JUST EYES, SO TO MAP IT OUT, YOU MUST LOOK INSIDE, I KNOW MAPS CAN GUIDE YOU, BUT YOUR HEAT DEFINES YOU”

HOLD UP, DIDDY IS A WILD DUDE, I MEAN I AINT HEARD NUTHIN FROM BABS IN A MINUTE, I THOUGHT SHE HAD SUM FLOW TO HER 4 REAL, ... JAY SHOULD SIGN HER, AND LET FOXY BROWN GO, SORRY FOXY, I LUV YA 2 DEATH BOO BOO, BUT U NOT IT RIGHT NOW MAMMA, OR SHOULD I SAY..ILL NANNA., MY LIL MAMMA, MISS U.

I ALWAYS HAD A THING FOR FOXY, BUT, HOT IS HOT, AND SHE JUST AINT HOT, CANT WRITE, CANT PRODUCE, SHE JUST A HOOD CHIC WIT GAME FROM BROOKLYN.
JAY GAVE HER A SPOT, BUT SHE COULDNT HOLD IT.
I SAY GIVE IT TO BABS, AND LET SHORTY RUN WIT 4 REAL!

excuse me, ur, A-NAT, but are YOU a producer?

Puffy’s not a producer because ‘he doesn’t touch a keyboard’? Do you realize how long he’s been doin this? What qualifies you to decide what a producer does and doesn’t do?

Jodeci messed with him. So did (and still does) Mary. Biggie. Total. I could go on and on. But I guess they didn’t know what they were doin cuz he doesn’t actually “touch a keyboard.” Are you kiddin me?

People may not like the fact that many artists go to
bad boy and diddy ends up taking their spotlight.

Yes he should focus more on developing his artists but when he is an artists himself with a college degree, who can blame him for exploiting the artists.
As the young boys say,” thats the way the game is now” YOOOOOOOOU

BOOSY, BECAUSE HE HAS A COLLEGE DEGREE YOU ARE OK WIH HIM EXPLOITING ARTIST? THAT MAY BE THE WAY THE GAME GOES BUT THAT DOSEN’T MAKE IT RIGHT.

Start attacking me now. Jigga and Puffy are jokes. Could care less about one having a college degree and the other never finishing high school and they are heads of record labels. BOTH have exploited hip hop and have proved to be dis-loyal to those who got them where they are at today. They are the 2 main reasons why hip hop is in a state of decay that it is in. Both have made enough money to last them several life times over yet in still they continue to exploit and degrade the genre. They are creative and talented men who could have done more with what they were given. Puffy needs to learn how to use a condom and Jay-Z is just a trifling negro after he was shown shoving a woman/a fan in her face who tried to snap a photo of him. Hip hop has no more heroes left and its time we realize it. Biggie was right, the industry is just a gutter game. And I add that, Jay-Z and Puffy have been able to survive and remain on top because they are the greasiest of them all.

Chief 00 I say that because they carry a lot of weight in the industry. When you look at it, with the exception of OutKast and Kayne, very few hip hop artists are accepted on both sides. Jigga has been very accepted by white America. Even though I can’t stand him, I have to admit that he is very powerful and very influential. I remember when he did the interview on ESPN Radio, they loved his ass. Puffy is the same way. In spite of his baby mama drama, he has a spot on the Macy’s commercial and is able to hon-knob wit the best of the white establishment. His clothing label is one of the few hip hop lines that has a flagship store on 5th Avenue. Both could do so much more and they waste their talents on themselves. I am all about self-preservation but I have a problem when it is selfishness and doesn’t bring about change. So sorry to be so harsh but when we look at the missteps of hip hop those 2 have a lot to atone for. Just because Puffy worked for free as an intern and developed Biggie and Mary and Jodeci doesn’t give him the right to d*ck around Keith Murray, Black Rob, Junior Mafia (o.k. maybe not them), the Lox, 112 and countless others. And, Jigga has never attended one hip hop conference that discussed or was concerned with the state of hip hop and its affects. He is the head of a MAJOR record label and says nothing and does nothing.

I WOULD LIKE TO ARGUE AGAINST SOME OF YOUR POINTS BUT I CAN’T. YOU ARE TOTALLY RIGHT SO THIS TIME I WILL JUST SHUT UP AND LISTEN. I HEAR YOU THOUGH. YOU ARE SOMEONE I CAN LISTEN TO ALL DAY LONG.

TO THE COMMENT ABOVE, SHUT ME THE F*CK UP. JUST BECAUSE I AGREE WITH SOMEONE DOSEN’T MEAN THAT I AM SUCKING UP STUPID!!!

LadyDi, just wanted to say that was a very insightful comment of yours.  I am a huge Jay-Z fan and have been loyal through the bullshit and the greatness, but I can’t really argue with your statements either. I mean anyone in the spotlight has the responsibility to their fans to be good examples and definitely give something back. While Diddy has certainly made more efforts at this, they all have been pretty much self-serving.  Hip Hop is going down the drain, and quickly and it will take power people in the game to revive it and put it back on its feet.  It used to such a beautiful sound, now it’s full of gimmicks and catchy hooks.

And I didn’t realize people were still starting internet beef with people they have never met just because they state an opinion…that’s still crazy to me lol.

HAPPY THANKSGIVING LADYDI, I LOVE TO HEAR YOU TALK PREACH ON SISTER. FROM THE CHIEF 00

Happy Holidays to you as well. To AshNeicole, THANK YOU usually when I say anything against the “greatest of all time”...I get attacked like nobody business. One of my favorite, all time favorite songs is “Don’t Knock the Hustle”. But the hip-hop game is so irresponsible and disappointing. What I have been so disappointed with is that “BET Hip Hop vs. America” special. I was so disappointed in how Nelly and TI disrespected Stanley Crouch and how the audience just shook their heads in agreement at whatever TI and Nelly said, especially the women. But what was even more shameful is that Master P (and yes he has issues too but he is smart enough to attend and discuss and participate and just as whites allow for indiscretions of youth we need to be forgiving as well and not be so hard on each other but damn Jay-Z has got to be 40 or 41 and Puffy is 35 or 36) for Puffy and Jay Z not to attend or even comment or send a rep is so disrespectful but both can break their necks and comment on AMERICAN GANGSTER…UNREAL.

I didn’t mean to say Master P was shameful. I meant to say that it was shameful that Master P was the only “head/owner” of a record label there and disappointing that the power players like Puffy and Jay-Z were not. I no longer accept the excuse that if hip-hop artists take a stand then their label punishes them. Master P via Romeo has become very mainstream. The powers that be at Nickelodeon and at USC could have canceled Romeo’s application and contract but hmmmm they didn’t. I am tired of the excuses that these artists give about how them “taking a stand” and speaking out cuts off their money supply. Master P seems to be doing fine and so does Mos Def. So I guess the question is “easy money” vs. “money of value/substance”.