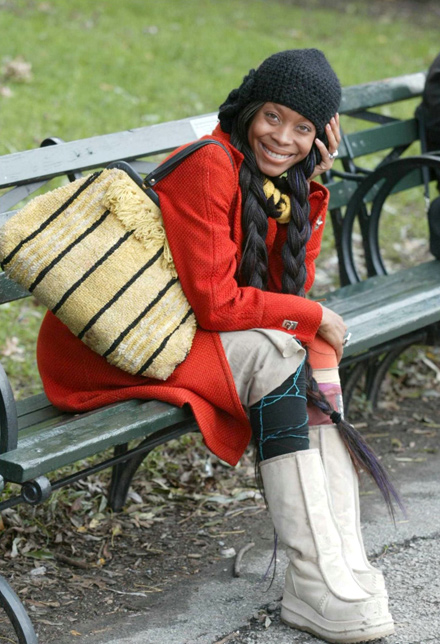 Here’s a little something for your Twitter-side #musicmonday: “Window Seat” off Erykah Badu’s new album “New Amerykah Pt.2: Return of the Ankh”, due March 30. Erykah could have fast-forwarded the second installment connection and titled the album something with more chipotle flavor. On the soundscape, judging by this first song, Erykah has returned to her roots with an earthy, organic vibe that in today’s market can’t simply be tagged neo-soul; now it’s just music worth listening to.

The music monday tag really bugs me - new music officially comes out on Tuesdays - but guess, what? “Window Seat” is going on the Pod, Monday morning.

Love it!  We missed you Badu!

She is the absolute best thing out

Love it, can’t wait for the album to drop…

Who cares!!! My boyfriend thinks the same with me. He is eight years older than me, lol. We met online at~ AGEGAPLOVE . C O M ~a nice and free place for younger women and older men, or older women and younger men, to interact with each other. Maybe you wanna check out or tell your friends.

SHE IS VERY BLESSED AND IF YOU CAN’T SEE IT THEN YOUR BLIND! THE ONLY THING SHE IS ACCUSED OF DOING IS LOVING PEOPLE! MUCH LOVE TO YOU QUEEN!!!

...amazing, u kept us on the dark for far too long!...i got my money ready for that cd!

i luv her she is by far different and don’t care how ppl thing of her! i luv her fashion statements…lmao…..I Respect that, her last CD umm wasnt feeling it but hey im a die hard fan 4 life, now this window seat i like, watched the video…......lets just say i’m SMH, still a die hard fan tho i will be buying the cd wen it drops. 😉 peace and blessings to u MZ.Badu

Hey world…...watching Window seat will free your soul. It was liberating, relevant, gutsy, inspiring, and real art. I love you Badu because you are brave and have an authentic heart to uplift and challenge the status quo. Keep creatin and we’ll keep supportin. Peace.

First of all, I love the video for window seat. It is a thought provoking idea. I think that people need to live their lives freely without judgement from others. Nudity is a beautiful thing and people should be able to express themselves as they please. I LOVE ERYKA BADU AND WILL CONTINUE TO BE A PROUD FAN!!!

Just copped the cd. I love it. Erykah is the neosoul queen.