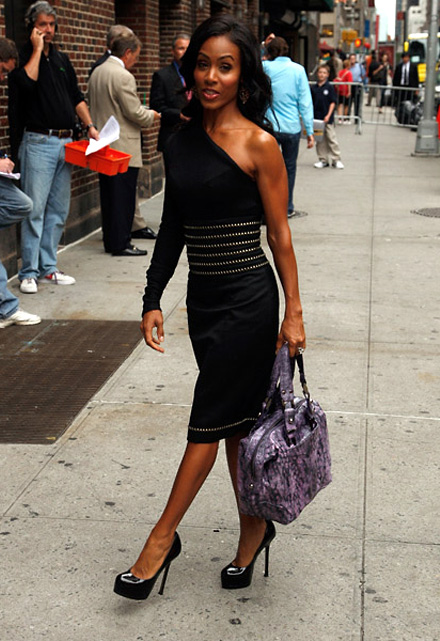 Last night Jada Pinkett-Smith was on The Late Show with David Letterman. Jada was there to promote her role in The Women, a movie featuring nothing but the female species. If that sounds a little Ellen to you, you’d be on target. Jada plays a lesbian writer named Alex Fisher.
Jada and Eva Mendes had a dancing and kissing scene that was cut from the final print. Look for it on the special edition DVD. You know how that works.

There was more talk about the family than anything else. Funny thing: right through the Hollywood glow, Jada talked about chaperoning Trey (Will’s 16-year-old son from his previous marriage) on his first big date. That’s like regular folks stuff. Not bad. Just where does this happen? How strange would it be for a kid to say, “That’s my mom in the car. Yeah, Jada Pinkett.” She’s there waving.

All celebs put their pants or skirts on one leg at a time, but when you live in neighborbood dating range and it’s not dubbed the Twilight Zone I guess your zip code is 90210. ← Hah, is that a real zip?

She is looking a little long in the tooth and like she possibly has had some work done.

Is it cheek implants… if so she should have never done it. it take away from her natural look which was very nice.

jada your hot tell willow i love her and tell her im 9 to.

Brilliant, Insperational,humerous.. ive done Alaska to aclcuapo by bike. Im planning on going back and finishing at Tierra del fuego so its great to see the delights what lay ahead! Bigup.