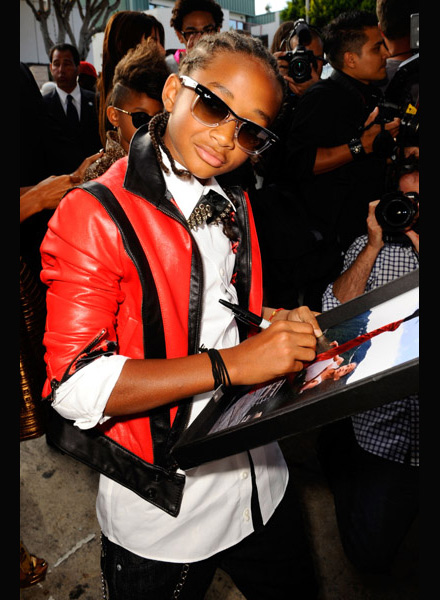 The Karate Kid put a roundhouse on The A-Team this weekend, taking in $56 million over three days. Will Smith only has two movies with bigger first weekend numbers: Hancock and I Am Legend. Jackie Chan played a part in attracting movie goers; Taraji P. Henson was a bonus for some; but let’s just call Jaden Smith the start of a new generation of Hollywood superstars.

The Karate Kid was produced by Will and Jada Pinkett-Smith, which got a smirk by some in Hollywood who thought the Smiths were doing it just so Jaden could play the starring role. Correct, but it was the right move. The Karate Kid’s production cost was $40 million and they got it back with change; doubling Sony’s expectations. In contrast, The A-Team cost $110 million and barely covered with $26 million over the weekend (it’s only downhill after that.) Even more perspective, Get Him to the Greek, with Diddy, Jonah Hill, and Russell Brand, cost $40 million and in its second week is only at $36 million. 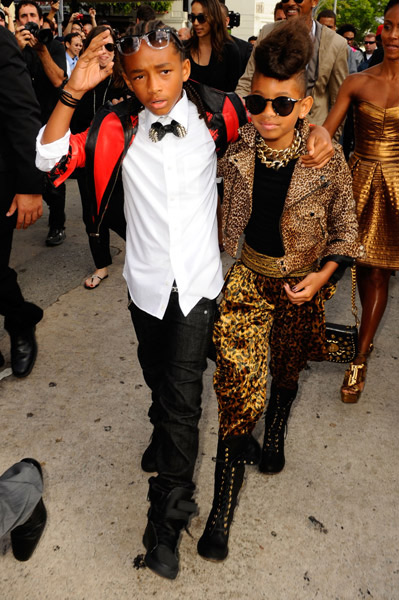 With this kind of success, there’s no doubt there will be a Karate Kid sequel. I’m thinking little Willow Smith joins her brother for a kid friendly version of Kick Ass.

In case you missed it, here is Jaden Smith, last Thursday on Late Night with David Letterman.

The Smiths, such a beautiful family. I hope Jaden stays humble with all his success and doesnt let it go to his head.

i like the movie karate kid.it made me cry when u was getting hurt.i like u as a boyfriend .hunk me up with him some body please that boy is fin,and sexy is he

jaden smith don’t listen to the teacher I really like your movie it taught me some lesson and I hope that I meet you one day and I hope you read my command, Im 12 years old I believe in my dream that I will meet you some day I really like you and don’t think that I rote all this to show that I like you I love you the way you are that you will be and I hope that you become a bake star in your future I cry when I wrote this command I hope I meet you one day         to .......... jaden smith

Bill Chapman and “Bill, what are you talking about? Anyone who saw Karate Kid with Jaden Smith knows he worked HARD.  Jaden is an amazing actor, athlete, and dancer - for ANY age. I would rather see child stars in movies produced by their parents with the parents nearby than see child stars put in situations without family members and getting abused. Ask Thandie Newton - or nearly any of the young female stars of Zefferelli movies. Jaden Smith EARNED his success. He learned his lines and acted well in The Pursuit of Happyness, and he clearly worked like all get out in The Karate Kid. Anyone complaining here can’t POSSIBLY have seen the movie. If you had, you know just how MUCH Jaden deserves all the accolades!

I loved the movie i wish i can meet u.i also think your cute

Jaden,thanks to you and your parents vision to magnify your talents to enhance this diverse population to another world and learn the cultural differences and expectations.Hopefully, this will motivate readers to explore read more about the global world.

yOU SO daNG cuTE

Ohhh i love karate kid .. and i love jaden smith with justin bieber at never say never… add me at fb :D .(JavaScript must be enabled to view this email address) tnx

jaden smith when i saw you get punched and hurt i cryed. it was a fantastic movie but sad . i realy like you to im 11 years old. i like the new song you and justin made never say nver.i like your part.

i LUV your new movie…..x

(add mee on msn - .(JavaScript must be enabled to view this email address))

U ARE SOOOOOOOOOO HOT,SEXY,CUTE,AND SWEET I LOVE U

Let haters be a motivation…. I do.WHatever happens to you people who say you were an orphan and jaden didn’t work hard.He obviously did.And is it his fault that you weren’t born into a family of actors .NNNNNNOOOOOooooooo! neither was I but I have just begone to write music and I guaranty u will c me soon not because I’m rich or because my parents pay for acting and dance classes.Not because all of my brothers are muscisians.But because I work hard.I love what I do.And if you spent more time pursuing your dream rather then hating on a little kid who bacame a big star maybe you will c him at the grammys but don’t ask for an autograph.<haters not allowed> LOL!

My entire family enjoyed this movie.  I encouraged other parents to see it with their children.  It made an excellent family outing.  Peace

This movie was the best movie in 2010. Sure A-Team was good, but you don’t see an everyday 12 year old boy whoop butt like that in china.

yo Jaden whats up

I want to be your BFF

the boy is talented..we can’t take that from him

omg u r so cute-to jaden smith and willow yu r soo adorable!!—I LOVE YOU BOTH! <3

jaden smith is the best

yo willow smith i got swagg like you and im rich like you but you dont no who like you and you need to pick how is it going to be shaheem or his brother dont pick late on you jaden smih tell willow your sister that and i will be with shaheem hendrix to day when i see him and i all so thank that you can go ote with my sister she is 13 like you and im the best in my school and now im going to go to a party it me up if you want to com my number is 13479510923 call and hit me up ok dont be late to call then you wont come it start at 9.00 call at 6.00 this is the best party ever that im ever going to and jaden smith you now no that im not playing call me ok good by

I love you all

i love you soooooooooooooo
U ARE SOOOOOOOOOO HOT,SEXY,CUTE,AND SWEET I LOVE U
i love to meet u
:D

u are a cut and sexy boy

Just finished to watch karate kid with my family.  The Smith’s family is the most talented family in the entertainment business. I hope to see more of your great and hard work in the future. You guys deserve it all!

(PLEASE READ THIS) Hey Jaden i just want to talk to you but on Facebook.com my name is Sydney Coleman look for a 12 year old girl under my picture it will say To Good To Be True just give my a message please
Love Ya!!!!!!!!!!!

Boy you are brave ! i really enjoy watching your movie “Karate KIds” More grease to yah elbow, lol….... one love.

I LOVE YOUR MOVIE “KARATE KID"I WATCHED IT LIKE 20 TIMES.YOU ARE SO LUCKY YOU MET JUSTIN BIEBER I SAW HIS MOVIE IT WAS AWSOME I LIKE LOVE BOTH OF U IM YOUR #1 BIGGEST FAN!!!!!LOL…...LOVE YOU VERY MUCH.
SINCERELY,
YOUR BIGGEST FAN ALANA

JADEN SMITHS GETTIN ALOT OF PUSSY LIKE HIS DAD

YOU KNOW WHAT MAKES ME LAUGH ALOT OF PEOPLE ARE STUPID ,STUPID AS F*CK ITS FUNNY YOU DUMB F*CKS YOU GOTTA SEE THIS BITCH SHE GOT SOME BIG TITS IM OUT

AND IF ANY BODY GOT A PROBLEM WIT ME F*CK YOU YOU DUMB HUMAN PARISITE A.L.I.E.N . ILLEGAL

whats up shaheem hendrix what you doing

How was it making the movie

i really like the movie you to cute n young lol

you are the cutest dude ever. you are cuter than Justin Beber.lol

Hey jaden i dont no if your reading this but im a big fan. I like you a lot but more than a friend you probably heard this before but im saying this from the bottom of my heart.this morning i started crying because i was thinking that i will never see you and never be together and that its impossible. when i thought that it just ruin my whole day. i wish i could meet you but i bet it will never will. Just in case your wondering im turning 12 august,9.I live in mannhime germany in a army base and I love you alot.Goodbye .

hHI I WAS WONDERING IF YOU CAN HELP ME BE COME A SINGER LIKE YOU,BUT I CAN REAY SING!
CAN YOU COME TO MY HOUSE..
ADRESS.725MIDLLE BROOK DR.

hey sarah you dont talk about him ugly ass bitch

u ugly white xxxxx you s’mell like my xxxx

i have a girl alexesis

hey jaden i liked the way you won the karate championship

JADENSMITM AM ONE OF YOUR FANS ILOVE YOU SO MUCH

hey jaden i am back how are u doing now?

ILOVE YOU SO MUCH YOU ARE MINE FOREVER