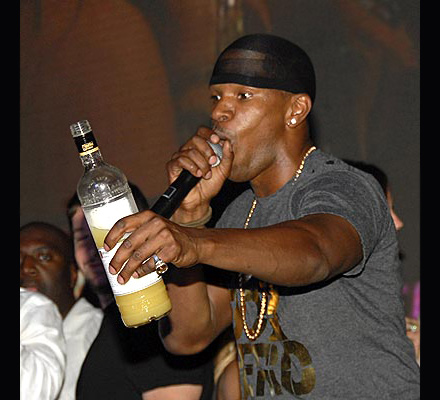 Jamie Foxx’s video for “Blame it” debuted this week. The club drink spiller of the moment features some true ballers with the Henny in their cups screaming money aint a thing.. throw it up in the skyyy, hold your drinks up highhhh. We’re talking Ron Howard, Samuel Jackson, Jake Gyllenthal, Forest Whitaker, Quincy Jones, Cedric the Entertainer, Morris Chestnut, Bill Bellamy, Tommy Davidson, Clifton Powell, Tatyana Ali and Clarence Avant. As you read that list it gets a little more like ping-pongers, hah, but Jamie definitely called in some IOU’s or in the case of Richie Cunningham favors are owed.

Earlier this month at Clive Davis’s pre-Grammy party, Jamie Foxx told MTV that he was trying to create a Biggie-like experience.. “We went vintage. We wanted to sort of relive the Biggie experience. Remember when Biggie did the ‘One More Chance’ remix video? So, we relived that. But we have the most Oscar-nominated and Oscar winners in one video that you ever seen.”

Where do we even begin..

I LOVE the video, haven’t seen it anywhere else.. can’t beleive that.

I love Jamie in general and everything he does.

All the celebs are cool, I guess you’ve gotta do whatever you need to do sell albums these days.. sex tapes(ray J), fake beefs (keri/50), tour until you can’t walk straight (beyonce), endorse anything ( pick any one ), whore out your lovelife(kanye/rihanna/chris), re-release the same album (rihanna,bey, Kelly R)..

If I was an oscar winnder, I’d haul a bunch of a-listers out too, they’re all looking for something too believe me.

Oh and, is he making a shot at Kanye here with the bear mascot head??? Haven’t seen them together since the good days of Golddigga and both of them were relevant.. sad because now Twista’s gonna have to go get a real job and shit.. tough break.