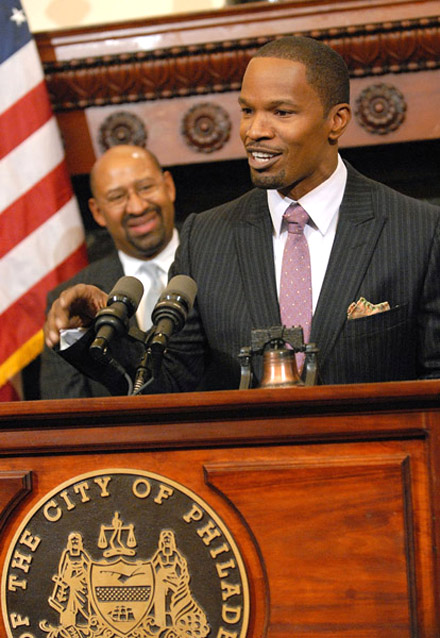 It always happens, once one person is successful at or with something, a bunch of me-to’s and wannabes come running through the door. That’s Jamie Foxx in Philadelphia yesterday, channeling his inner Obama. Although it looks like he’s running for Senate and then a run for the White House in 2016, Jamie Foxx was actually at a press conference to introduce the cast of Law Abiding Citizen. So I guess I should - and do - take back the characterization. It was one of those obvious comparisons, feel free to ride the wave. 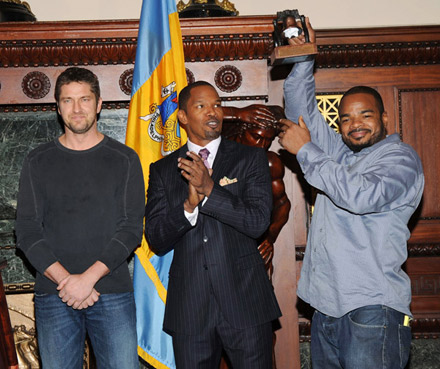 Directed by Friday lensman, F. Gary Gray, Law Abiding Citizen finds Jamie Foxx’s character turn into a wild-eyed vigilante after the killer of his wife and daughter is set free during the trial through a plea agreement. This sets Jamie on a mission for some self-satisfying justice. 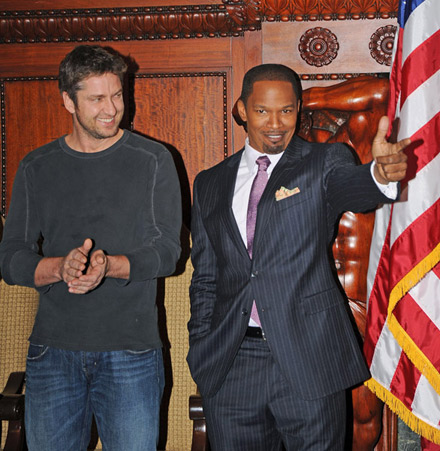 Think last year’s The Brave One, pull out a dusty copy of Charles Bronson’s Death Wish, or even have Jamie switch seats with Tom Cruise in Collateral and you’ll have the idea. By the way, Jamie Foxx would never run for office. In his own words, talking about former Detroit Mayor Kwame Kilaptrick’s scandals, parsed from memory → “I have toooo much baggage to run for public anything.”

By the way, since you did not identify the other actor in the photos above, he is the actor Gerard Butler, who is also one of the producers of this film.

Gerard Butler’s character is the one who turns vigilante, not Jamie’s.. 😉