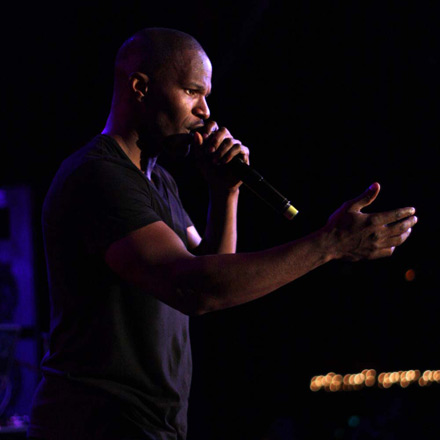 The 2009 BET Awards airing this Sunday was already going to be a big show: Jay-Z, Beyonce, Kanye West, Ne-Yo, Maxwell, and The-Dream are all set to take the stage. Michael Jackson’s passing will definitely take the energy to another level. As we speak, Jay-Z and Beyonce are preparing a Michael Jackson tribute. In fact, it’ll be an all out Michael Jackson festival. Expect—the unexpected, as all the big names in music clamor to join the celebration. Jamie Foxx is hosting the show. Yesterday at a BET press session, Jamie Foxx stopped to talk with Sam Sylk about the plans for the show: lots of MJ remixes, dancing, just a positive send off to honor the legendary, influential King of the game.

I’m sure someone is going to break into a moonwalk during one of the tributes; been there, seen it..

Someone needs to get on this robot.

Michael Jackson was an absolute artistic genius. The man never failed to disappoint me as a fan. As far as music goes there will always be a void that will never be filled in a million lifetimes. I don’t give a damn what anybody says or think, all these artists out here such as Ciara, Beyonce, Justin, Usher and Chris Brown can be replaced and easily forgotten if god forbid something was to happen or they decide to take a break. Michael was one of a kind and will forever be THE KING OF POP. Even though he is with the lord, no one will ever succeed his throne. My prayers goes to his family to get as much peace as they possibly can.

I feel sad.  I simply cannot believe that MJ is gone.  I loved the guy and appreciated his music.  People called him all sorts of things - but we all forget one thing -” that we ALL have our demons and skeletons” - and MJ was not any different. He loved genuinely and was not a hater.  No single ugly word came out of his mouth. R.I.P. MJ and you will always be the KING OF POP…
I just wished you had lived long enough to give us your come back hits:)

I agree with ummm…

u wit hard on dat