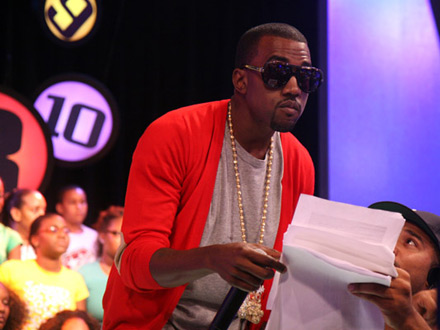 Kanye West is on the cover of this month’s XXL magazine.

If I may borrow a line.. “you can’t tell me nothing” .. the first response to Kanye’s answer to an interview question (especially when it’s about himself) is that he’s an arrogant, likes to run his mouth, funny dressing punk. Said without acknowledging that those things are exactly what makes him pop/blog material - someone to talk about. Not to mention they are also the specks of the ‘genius’ that goes into what and how he makes music. Flip the attributes - a humble, quiet, fashionably acceptable, nice guy - that’s someone who would walk through the music world like the invisible man.

In the article Kanye reveals a lot about how he approaches making music in a climate where the shocking and easy gets so much attention, when that’s not what he does or can fake off.. “There’s nothing about wearing a pink Polo that would make anybody believe that I would hold a gun.”

Kanye spoke on the Beanie Sigel just come out the closet diss. He said he was disappointed, but never thought about kicking in his door.. “Beanie ain’t no studio gangsta.”

So he can get away with a smack to the face, but Kanye reads blogs and from ya’ll (us) that’s not gonna be tolerated.

“I would read the blogs sayin’ “Kanye’s gay.” But it’s just the constant battle with Black people and being gay. Like, we’ll call something gay to diss it to the highest extent. It’s a hood mentality - that’s the way we think.
So, in hindsight, I’m glad he [Beanie] spoke on it, so I could speak on it.. But niggas ain’t gonna be calling me gay, and I’m not gay. Don’t disrespect me.

I don’t have a problem with gays, but I don’t be lookin at niggas.

I’m not accepting that shit.

That goes for everybody that’s writing a blog or anybody that’s said it in a barbershop. Don’t fucking call me gay. And if a nigga really feel like they wanna disrespect me like that, come speak to me face-to-face, and whatever it’s gonna be, it’s gonna be.

And this ain’t no threat. This is just how serious I’m taking it. Ain’t no once you-reach-the-1-million-mark Eddie Murphy shit with me.

Look at the “Can’t Tell Me Nothing ” video..

I got the no. 1 record in the streets, and my pants is tighter than a muthafucka in that.”

Huh? I literally didn’t understand a thing he said.

neither did I. So to me he’s still as gay as Julie Andrews on uppers.

But Kane you look gay! You’re plainly confusing us now!

Not gay.  Maybe a little syrup on his pancakes.  But honesltly is f**ked up how we waste time focusing on bullshit.  gay or not its all about the music he puts out.  PERIOD!

His musik is plain crap too. he allways have some old lady form the 60sing or something sampled. or a cover, or its with some hardrock/techno ppls

We cant have shit because of the next mu-f**ka Hate-n- Damn this the same nigga dat said “President Bush dont give a f**k about black people” on live tv. Now yall wanna talk shit! My black people yall need to wake up!Ignorant time is done for us. We in the playofffs now if you aint down wit gettin this money,livin’ life, and thanking GOD ‘consitently’ Then my suggestion is READ A BOOK

He’s not gay, he’s just unique and original.  People never know how to deal with something different, so they tend to create their own box for it.

Hmmmmm, me just thinks the brotha is “gay-ish” if you will.  Maybe he don’t booty bump but he just looks that way.

WHAT? Once again here goes SOCIETY labeling something just to cause a division amongst us! This HUMAN BEING named Kanye West overcame things that still have a lot of “Americans” living at home with their MOMMY! Now, that is not gay, that is down right pitiful! Here is a young man out there giving the WORLD something that is apart of him and all you can look at is the package that it is wrapped up in? We have people dying for our freedom and you/we can not say anything other than an individual, whom you/we do not know personally, is gay in an attempt to bring them down to your/our level? This is so sad! Half of America can’t even read, write or add properly! Then they go and run their mouths as if they are educated and are speaking on a REAL subject matter that is going to make a DIFFERENCE in the world!? Who cares if he is gay or not! If you like his music buy it! If you don’t like it, then don’t buy it! Simple as that! Where does sexual preference play into that? Please tell me! Will somebody read a damn book and get a REAL clue!

Pick your leaders and heroes better than this one. Name me one thing besides talking shit when things don’t go his way.
If he could just keep his big mouth shut, then maybe he wouldn’t be such a target.
His comment that “Bush doesn’t care about black people…SO WHAT!” The real statement is that Bush doesn’t care about poor people the dummy showed that when his solution to Americans going through foreclosure was “read the fine print”. So saying anything against Bush doesn’t mean that you have integrity.
Did Kanye West do anything to help Katrinians or anyone black in America in need? All he does is increase the bottomline of Louis Vuitton. He is no better than Clarence Thomas who became black and one of us when they trotted Anita Hill in front of the Senate. Kanyne is ONLY black when he is not getting on Center stage at the VMA’s or winning an award other than that he is rapping about blond dykes and Pamela Anderson.
He is a cry-baby and an ass who doesn’t stand for anything but a lot of hot-air and muffled talk.

Kanye is a very different talent and it shows in everything that he creates. I don’t think he’s gay,he so up front with everything that comes out his mouth he prob/would tell you.Come’on this is the same dude that said “Bush don’t like black people” how real is that..Fuck how you feel or what i have to loose this is how I feel an he said that shit..How real is that!?

LADYDI, I HAVE TO AGREE WITH KANYE. BUSH DON’T CARE ABOUT BLACK PEOPLE. POOR PEOPLE TOO, BUT MY FEELING THAT IF WHITE PEOPLE WERE THE ONES THAT WERE POOR BUSH WOULD DO MORE.