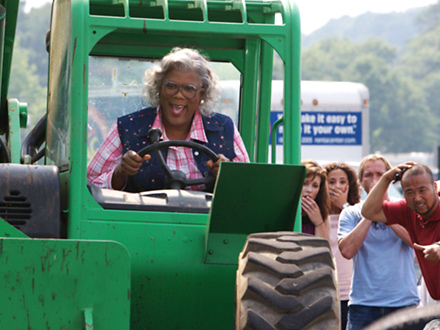 Friday morning I was checking movie listings, looking for the big weekend flik. You know, do I have to pencil in a few hours of popcorn and soda time. Only two this week: Madea Goes to Jail and Fired Up. I’ve only seen two Tyler Perry movies, one play, and wasn’t all that motivated to make it three. Though if we were guessing which movie would be number one for the weekend, Madea would be the obvious choice. Still, talking dollars and cents, who would have guessed it would pull in $41 million for the weekend?

Quick comparison: Fired Up, the former Las Vegas girl Molly Sims’ semi big screen debut, was playing in relatively the same number of theaters and managed just $6 million. We’re talking $20k per screen vs. $3k. Results like that are why, critics be damned, Tyler Perry continues to befuddle Hollywood executives.

Since I didn’t see Madea Goes to Jail, I can’t speak on it. So let’s take a trip to Reelzchannel where they stuck a mic in front of people stepping out of the darkness.

Madea Goes to Jail - What Did You Think?

The movie was all that and then some.  I loved it!!  It ended abruptly but whose keeping score?  Lil Rudie is sexy as hell now.  If I wasn’t so sassy I’d do her. 😊

I liked it. It was funny and had a good storyline… PLUS Derek Luke (I a fan)...But really for the most part I’ve found that either your a Madea fan our you’re not. I think it’s def worth seeing in the theater.

It was JUST ok to me. I shoulda waited for the bootleg. I was expecting all out funny. I give props to Tyler Perry for “making it through the struggle” and all BUT he needs to either take up some movie directing/producing classes or simply stick to plays. The acting was transparent and WACK. It had 4 star potential with the name alone…. I expected more.

The next all-new CNBC Original “NEWBOs: The Rise of America’s New Black Overclass” premieres Thursday, February 26 at 9p ET/ 10p PT on CNBC. CNBC/Wall Street Journal reporter Lee Hawkins goes inside the secrets to the meteoric success of the most prominent self-made, young, black multimillionaires, including Lebron James, Lil Wayne, and Sean “Diddy” Combs. Collectively, black athletes in the NFL, NBA, and in Major League Baseball earned nearly $4 billion last year and the nation’s 20 highest-paid hip-hop entrepreneurs brought in more than $500 million. Now, with their newfound wealth comes great pressure responsibility to their family, friends, and community.  See this inside look into how each NEWBO surmounted challenges to achieve a part of the American Dream.

I LOVED THE MOVIE ITS WAS FUNNY
AND I LEARNED ALOT FROM IT. TYLER PERRY IS AN AWESOME DIRECTOR AND WRITER HE DESERVE EVERYTHING COMING HIS WAY.
HE MAKES GREAT MOVIES FUNNY AND YOU CAN LEARN SOMETHING ALL IN ONE. IM SO GLAD HES MAKING MOVIES BECAUSE WE NEEDED SOMEONE LIKE HIM TO SHOW US HOW LIFE IS REALLY IS AND HE DOESNT HOLD BACK HE GIVES IT TO US RAW AND REAL. TYLER ALWAYS PUT GOD FIRST THATS WHY HES DOING SO GREAT BECAUSE HE GIVE PRAISES TO GOD FIRST UN LIKE THE OTHER DIRECTORS,WRITERS,ACTORS,ACTRESS,ARTISTS
I LOVE HIM BECAUSE HE MAKES MAGIC!!!!