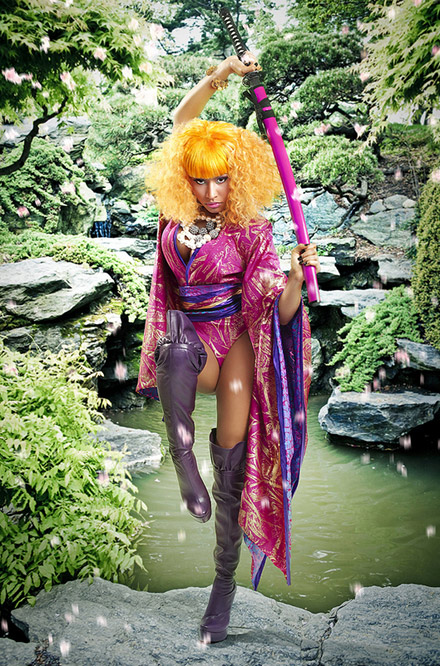 There she is: Nicki Minaj in a new promotional photo that she’s calling “Samurai Nicki.” It’s a great, creative shot. Now if there is a music industry God, or an assistant that handles this aspect of keeping people entertained, it’s part of a campaign for Nicki Minaj’s debut album Pink Friday, tentatively set for release on November 23. Yeah, the album is coming. Unbelievably, Nicki Minaj recently told Honey magazine she really wanted to release Pink Friday next year, but felt pressured to do so by Cash Money ie. Baby.

Her fear? “I don’t feel like people really know me yet.”

Really? How many guest spots/verses on random songs is it going to take? Nicki Minaj is beyond due to release this album. If she waits and longer, she risks cooling off and people (the Barbie army) getting tired of her, before she has a chance to list the first official entry in her discography. Learn Jay-Z’‘s blueprint for a 10+ album career: Don’t waste lyrics. If the history books were shut right now, musically, Nicki Minaj would be known for one great mixtape and some appearances.

Anyway, with Lil Wayne bouncing off Rikers Island in November, he’ll likely want to get on a track or two. That’d be a triumphant move and would surely boost sales. So there is a chance her album will get pushed back and Nicki gets her wish for that 2011 release date. Or maybe, you will still get lucky and instead of Friday, you get a Barbie for Christmas! Hmm, grab the camera, I see another photoshoot

you loke hot girl you are a veary intellut

I can’t for Pink Friday why didn’t I think of dat? Nicki is my girl go head baby

I love nickiminaj she is the best

This y0 circus ride it its yours bby..nw i knw ths knda genre wont fade away dat easly,thanx t0 my man Weezy you guys rock my life out..young money

Bad styling. This dress is not kimono. Disgusting!

I also think that her dress is teribbly bad. Just like an imitation of cheap Chiniese dress.

Nicki u da bestest luv u…

u the baddest no lie.

nikki u look nasty ok i come from the V.I ok

i caint wait to go and get a copy ,good work Nici Minaj

drizzy and nicki make the perfect couple.they’ll be better and richer than mis b and jayz in no time

ummmm, richer and better than B and J?!!! Yeah minus the class. Drake doesnt really look like he likes Nicki romantically. Mark my word. This is like Ben Affleck and J-Lo’s brief,fabricated relationship. Affleck was A-list Hollywood and J-Lo was barrio at best. Those two werent really a couple. It didnt make sense. Nor would a Drake and Nicki match. But hey if you wanna promote a label (or a bad movie like Ben and J-Lo did) create some pretend romance or other assorted drama.

Now to Nicki, she doesnt know who SHE is yet. Stop wearing the blonde and colorful wigs. Lil Kim already mastered that look. Beautiful, Nicki is. Her rap style is weird, not unique, just weird. like she slips into a drug trip mid rap. She has talent tho. I’d like to see how she transform her image and style….because she must be more than a
an odd, younger reproduction of Lil Kim. Kick Lil Kim to the curb if you wanna but Lil Kim did her own thing…not like any other lady rapper and was smooth and in control. Nicki is just odd, deranged like the boy on The Shining, mumbling “RED RUM, RED RUM”.

omg ive got to meet you, u are so pretti i will meet u some day i will really want u to have kids. bye thtz all i want to say and remeber u vare such a barbie happy halloween

heeya nicki i really love how u look on that pic

OMFg nicki minaj is the best.

is right gonna be on this 1 lov tha pic gurl

nikki is so different and have her own style ..lil kim need to fall bak and thtz real she jus hatin old ass.!

I LUV U NICKI SOO.SOO MUCH

U HOT BUT NOT THAT HOT

lov nicki m. to hard, she go to hard. and them itches out there that think she crazy and she to live. luv u to barbies!! 😊. but to you itches who think she to crazy aint got no fashion sence, no comment to yall MEGA HATERS! Get a life and leave nicki alone. Da done done!

gul u so crazy i love ur hair and ur swag

OKay look, this is what i have to say to maroi.
Nicki minaj is a trendsetter she is beautiful & talented & unlike lil kim she is different & unique.
TRUE! She is a little weird at times but that’s her you have to be who you wanna be in life and people like you maroi don’[t understand that;so you become a rapper and we will see if you sale BITCH!

It gives you a chance to make your life better and open opportunities for you to meet the attractive interracial singles and treat you like a Queen. Maybe you wanna check it out or tell your friends.

ilike your songs i am form brokliny new york

i knew dat bitch is up 2 sumthing

go nicki turn up the swagg hope you live to see many more cool.i love you nicki no matter what they say oj still do.

i love her i am a big fan