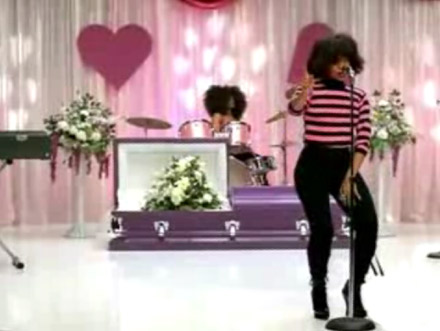 What up peoples? I’ve been on an unintended hiatus the past week and a day. It was only this past Saturday that I got to the regular routine and was able to digest some of the pop life.

What better way to get back in the mix than with a taste of the icky, sticky honey Miss Badu spilled on the table? Yes, Erykah Badu’s video for “Honey” hit the net this morning.

Remember all that stuff I said about Janet Jackson’s video? This is a 180 degree flip. Where Janet’s video ~ in my mind ~ doesn’t compliment the song well, “Honey” is perfect. Not only does it take an OK song to the next level, it’s the type of video we’ll call MRP. As scribbled by Steven Johnson.. “Design each title video so it can be watched many times, and you’ll end up with a more interesting and more challenging culture. And you just might get rich along the way.”

I’m really just spitting book bits; the idea to hang on to is this.. you can watch this video 1000 times + one more and still not get bored. If you’re one of the lucky to have first hand experience with the music and image references sprinkled throughout the three minutes, it’s that much better. But Erykah Badu’s quirkiness and the vibrancy of the song and visuals makes it eye candy for kiddies of all ages.

By the way, in some of those references she takes shots at the industry which might not be noticed on first watch. Like that picture up top, in black tights and the pink girlie background. In the video she even throws a little side booty shot. She looks good. Who knew she had a body like that? But I think that’s a tap at the indo too. Doesn’t matter though, Erykah’s just keeping true to her butt naked Wednesday theory. Overall, I say, let’s chalk one up for Amerykah.

I love this video. Brings some creativity back to music videos

her and 3000 deserved each other, very creative and unique

i’m a gemini (so I know how to just say just f**k it and leave)i’m also known to rant for mthons then stop blogging for a year..and I’m known to just redo my whole damn blog and call it a makeovernow i’m back in the saddle just in time for all ya’ll to start talking about taking a breakain’t that some shit