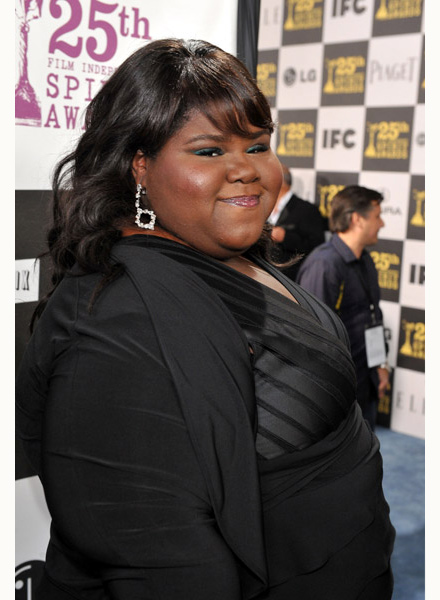 Tomorrow night we’ll all be watching the Oscars and chatting it up twenty ten style via Twitter. Gabourey Sidibe is racking up awards for her role in Precious. Among them, an NAACP Image award, an Independent Spirit award and she’s up for an Oscar in the best actress category. A win at the Oscars will even put smiles on the loser’s faces. If she does win - which I hope she does - Gabourey is going to have to take on vastly different roles in the future, to prove she can portray more than a school of hard luck teenager.

I’ve written about it and Gabourey is still reminding people, Precious was a character in a movie. “I’m so different. All it takes is a conversation, a sentence from me, to know that I’m not that girl,” Sidibe says. I suspect people hear what she’s saying but still think, “Hey, Precious is on the red carpet!”

Lee Daniels, the director of Precious, says Gabourey’s personality is the complete opposite of Precious and he has her next starring role in the sketching stage to prove it - we’ll see how that works out.

In the meantime, Pop Sugar TV is all aboard the Gabourey Sidibe train; win or lose, they predict she’ll emerge from the Oscars as an It Girl - along with Zoe Saldana, the voice of Avatar’s Neytiri, and young apprentice, Anna Kendrick, from the George Clooney flick Up in the Air. It Girl, means a step forward to see first, know right away status, translating into Diddy’s infamous problemo: mo money, mo stuff to handle. A problem not too many mind having.

Zoe Saldana isn’t nominated for anything, but I’m glad to see her name in super bright lights; been a fan for years. Anyone have her number?

I hope she win, even though I’m the biggest fan of Meryl Streep… But, let’s be honest, they’re not going to give her, the academy voters love Sandra Bullock (is she even an actress?) just because she stayed in this business for so long (something similar that happens to Julia Roberts when she won for “Erin Brocovich” instead of an more deserved Ellen Burstyn for “Requiem for a dream” -Meryl is the Ellen Burstyn of this year-)...

Well, I was watching pages about the award season like the Gold Derby, and just minutes ago, changes a lot how the front runner in the best actress category was… They’re comeback to Meryl… and I read something really interesting about the nominees, who says that well the critics think that Sandra and Meryl have the adventage, the anonymous Academy voters have said that their votes went to Carey Mulligan and Gabby Sidibe (I’m hoping for the last one, really hope for her… I’m so so so sorry Meryl, you’re my number one still)...

Gabourey Sidibe is so pretty! i hope she loses a bit of weight tho, she would be really good if she was like jennifer hudson’s weight…:
yeha i haven’t seen blind sight yet so i dont know if sandra bullock was deserved the oscar or not…

Yeah she needs to lose about 150 pounds tops.

you people can be so hurtful with your comments.WILL YOU IS A BITCH AND A PUSSY. And to the person who said she needs to lose 150 lbs how big is your ass? No pitcure of you up there.
ALL OF YOU ARE HATTERS

Yuh guys are very hurtful me being a big myself..Will Say Go Head On Sister Yuh Did Yoh Thang..

U R BLACK BEAUTIFUL AND PRECIOUS NO MATTER WAT YOUR SIZE

she did dhat movie precious

How do yall haters wnt to talk shit bout her and some of yall need to worry bout ur own weight ???? i dont see u on the oscars so i think u should shut the hell up