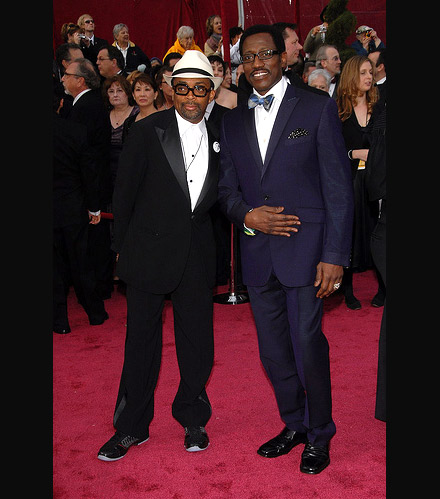 In an interview in King Magazine, Spike Lee says he’s selected Wesley Snipes to play the Godfather of Soul in his upcoming James Brown biopic. JB was working with Spike on the project before he passed in 2006; since then it’s been under the warmer at Paramount Pictures. Wesley’s got that bid to complete, so Spike Lee has plenty of time to get the script and business with the suits right. Once he’s out this will be Wesley’s first chance to revive his career.

Spike Lee believes Wesley Snipes can pull it off..

“He’s a phenomenal actor, and I truly feel that he’ll regain that power he once had. If my James Brown picture ever gets made, he’ll be playing James - and he’d kill in that, without a doubt. He still has chops.”

That sound you hear is Eddie Murphy cursing Spike’s name. That James Brown impersonation was his last chance to pick up an Oscar. Really, if you think about it.. Eddie Murphy vs. Wesley Snipes?..
Who would you rather hear sing “It’s a Man’s Man’s World”?

either one as long it’s not jamie foxx, will smith, terrence howard, or denzel washington. Give murphy or snipes a chance.

I won’t say give Eddie Murphy a chance. He doesn’t give anyone a chance in his movies. He does as many parts as possible in any of his movies. How many chances does he give black actors?