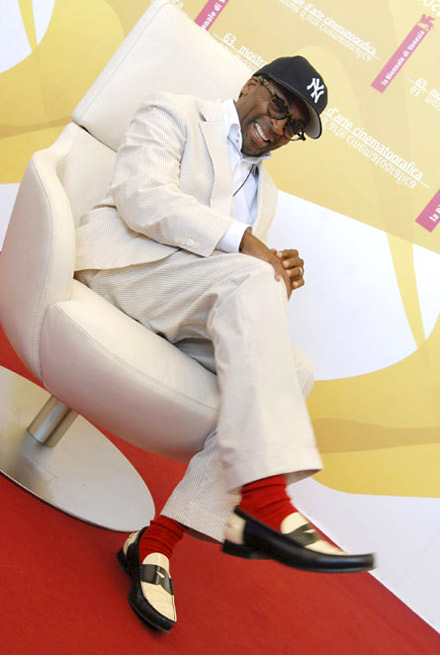 Yesterday, at the Television Critics Association conference, Spike Lee was asked the question of the day: What do you think of Jesse Jackson’s sack slicing comment?

Spike’s on the mic.. “I don’t think his comments help anybody. It’s just unfortunate.. Here’s the thing: I don’t know why people are questioning whether Barack Obama is black enough. For me, that’s an ignorant statement. There are middle-class, educated black people who speak the way he does. We have to try to move away from this so-called image of what black is, which is largely influenced by rap and that type of stuff.”

Spike went further to predict Obama’s win this November and a flip of the calendar.

“When that happens [when he wins], it will change everything. You’ll have to measure time by ‘Before Obama’ and ‘After Obama’ .. It’s an exciting time to be alive now.”

OBAMA!!! OBAMA!!!!  I JUST FEEL THAT JESSE JACKSON SHOULDN’T BE DISCOURAGING OBAMA HE SHOULD BE PRAISING HIM AND ALSO WATCHING AND LEARNING FROM HIM BECAUSE HES DOING SOMETHING HE COULDN’T DO AND THATS HAVING A SUCCESFUL PRESIDENTIAL CAMPAIGN AND JESSE SHOULD BE ASHAMED TO SAY THE THINGS HE HAS SAID HE OF ALL PEOPLE WHO MARCHED WITH DR. KING AND FOUGHT FOR EQUALITY FOR AFRICAN AMERICANS HE SHOULD CRAWL IN A HOLE AND PRAY FOR FORGIVENESS..

He’s just a man. Fallible just like the rest of us. He is not a measuring stick for greatness. He didn’t die for anyone. He is just a smooth talker. He will go to the grave like everyone else, turn to dust. The man who makes a positive mark in history is a humble, serving, and God fearing man. The rest just make a mark or a stain.

You are my itapirsnion, I have few blogs and often run out from post .  Tis the most tender part of love, each other to forgive.  by John Sheffield.