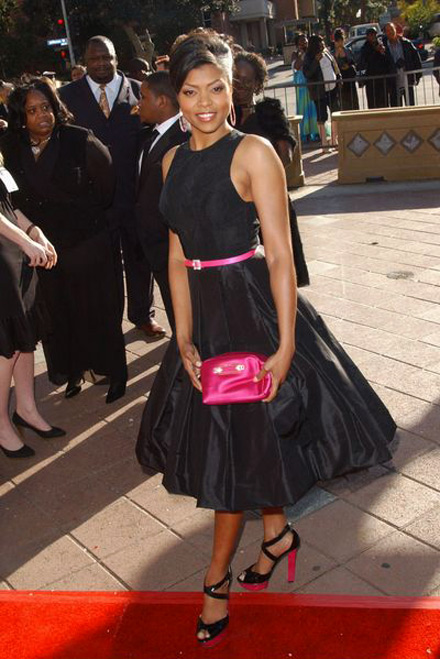 “The Oscar for best supporting actress goes to.. Taraji P. Henson!” Those could be the words spoken at the 2009 Academy Awards next February if the whispers about Taraji P. Henson’s performance in The Curious Case of Benjamin Button is everything it’s said to be. The movie, set for release Christmas Day, stars Brad Pitt who is born as an 80-year-old man and ages backward.. he becomes a child. If that’s not curious enough, how about the idea that Taraji P. Henson is his mother.

Ok, that’s explainable. She’s his surrogate mother, and her performance is the talk of the flick.

The casting director, Laray Mayfield was impressed with Taraji’s Shug Life in Hustle & Flow and invited her to audition for the role of Queenie in Benjamin Button. Like the film, it got a little weird. Taraji → “Laray was in tears. I’m thinking, ‘Wait, did she take her medicine?’ She said it was because she had found her Queenie, and we bonded. I do a lot of auditions, and they don’t necessarily go anywhere.. I wondered, ‘Did I get the job?’ They say work begets work, and it honestly does.”

Taraji was at the SAG Awards, she stopped to talk about the movie.

“It’s an epic, that’s all I can say. It’s an epic. It’s like a modern-day Gone with the Wind. They don’t make films like this anymore. It’s beautiful to watch. The cinematography is going to blow you away. The message, the story… I mean, in the screenings grown men had to collect themselves before they could get up and leave. It’s one of those movies that will touch you in ways you’ve never been touched in a long time in film.”

The Curious Case of Benjamin Button

I can’t wait to see this movie..

I uandrstned TV Guide’s position on the cover, given the reason. That billboard is just boring and poor marketing. It doesn’t make me want to watch the show, but seeing her beautiful face would’ve. She may be mistaken about her role in the series, since I didn’t even know she was on it until reading this post, but we won’t truly know until it airs.