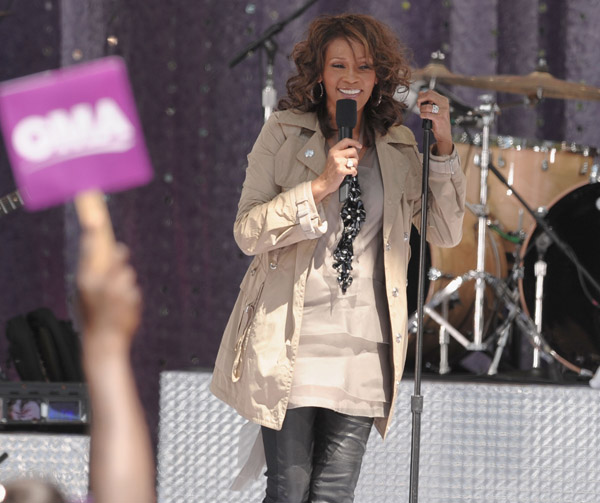 On Monday, Whitney Houston performed for Good Morning America in Central Park. This morning I woke up to reporters shouting their critiques of the performance “Whitney Houston’s voice cracks” (No pun intended.) Watching the video it’s clear her voice is not in the best shape. Not sure if it ever will be. Whitney Houston offered an apology to disappointed fans, explaining that her throat was sore after chatting it up with Oprah in a taped interview the day before the Good Morning America performance. That must be some kind of interview: big laughs, shouting and snortin, ‘girllll,’ hallelujah!

Here is Whitney performing “My Love is Your Love”..

At about 3:15, Bobbi Kristina comes out to and gets a nice reception. 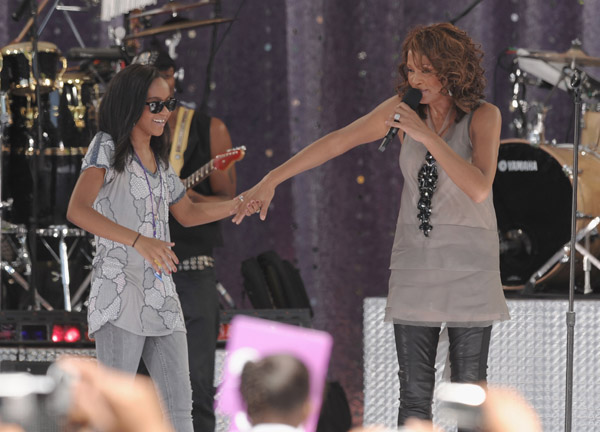 It’s got to be great for Bobbi to see her mother back on her feet, but you’d think Bobbi would have inherited some of the high performance gene from Whitney and the King of R&B. That clearly has not happened. When given the mic, Bobbi’s command of the stage sounded like what any other teenage girl would offer .. Uh, clap your hands.. 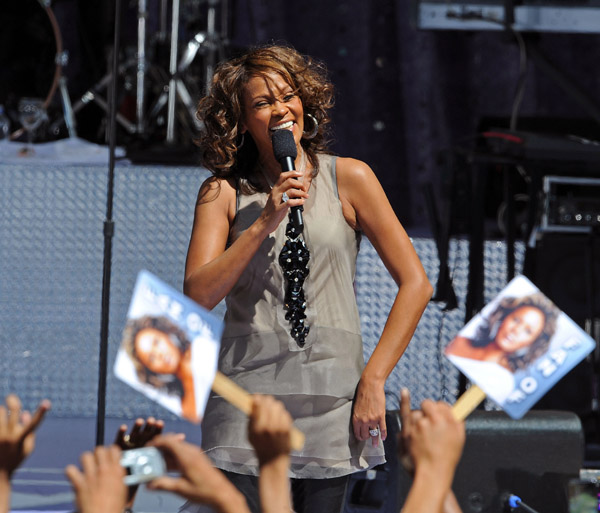 That said, I’m wishing Whitney Houston all kinds of blessings and good luck with her comeback. It’s not easy to kick a serious drug habit. Even harder to get back on stage knowing that fan’s expectations will be nothing less than hearing the classics sung in perfect form. Rightfully so. No one wants to see old, fat Jordan shooting jumpshots on the Wizards. For Whitney’s legacy sake, here’s hoping there will be better days than this.

Her voice was not in good shape but you could hear that she still can sing! She was hoarse and sung like she always does, but this time that wasn’t a good idea! If she sung a little bit more safe, without the long high notes, the performance was actually very good! Too bad that she tried and tried and tried to get the high notes with this voice. Because of that she looked a little bit stupid, I almost cried when I saw “I look to you” and thougt; my goodness! What are you doing to yourself? The song Million DOllar Bill was actually pretty good performed, that’s how she had to do the rest of the songs…
But if you listen to her new album; it’s amazing!!! I think it’s the best album she made. She still has the voice, only not on this particular day…

i give whitey my respect cause yea she f**ked up and yea she is trying to come back but people lets not forget she is the real princess of RNB u can tell that the drugs has effected her life but the thought of her trying to get back on track and the fact that her and bobby is not together no more she can be that beautiful flower again and sprout…................get it whitney and good luck