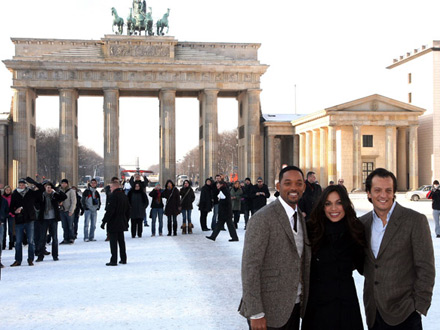 Over the holidays, Seven Pounds, the take my body parts for free, epic, passed the $60 million mark. Not Will Smith’s biggest hit, but enough to clear the $55 million it took to get it on screens. It was all extra anyway. This week Will Smith was tabbed as Quigley’s top box office star of 2008. Quigley polls are regarded as one the most reliable indicators of an actor’s star power. Hancock‘s $228 million put Will Smith ahead of Iron Man (Robert Downey Jr), in second, and The Dark Knight (Christian Bale), in third.

The machine don’t stop, though. Yesterday, Will Smith, Rosario Dawson, and director Gabriele Muccino were in Berlin to give the Germans a piece of themselves. ← that’s a little seven pounds, literal humor. 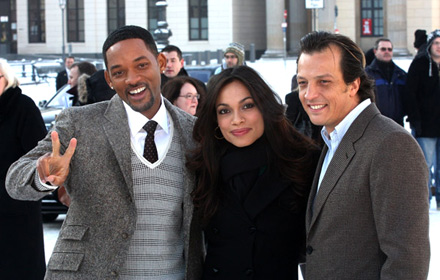 I don’t want to see Will and Jada go to splitsville, but these two do look good together. It’s not just this picture, you saw them in the movie..
Oh wait, you didn’t. That’s why Sony movie execs are scratching their heads.

Loved Seven Pounds! Loved Rosario in it too. I don’t see where they look ‘good’ together. What the hell does that mean? Each of them look good with a lot of people because they are good looking..wow.

Mimi will you give me a break? I’m trying to break up a marriage here. 😉

Good luck with that Chris.

I saw 7 pounds and….the concept was nice however there could have been a little more explanation. It left something more to be desired….it was like watching a movie like 6th sense, or usual suspects, or crash…and missing an entire scene…you get a little lost…they could have done a little more. but over all it was a good movie.

**And Chris….stop tryna break up the only good Black couple Hollywood has…smh, they give me hope!!! ...no word on buppies still???!!?!

I would drop Jada Pinkett like a bad habit for Rosario Dawson…not taking anything away from Jada tho.