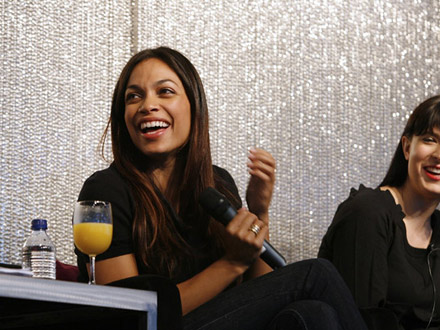 That’s Rosario Dawson at MTV’s Election Effect panel discussion. Rosario was their to represent Voto Latino, much in the way that Rosie Perez is on the beat, she talked about the importance of voting this November. You know that story.

A smiling Rosario gives me the opportunity to post the trailer for Seven Pounds. She’ll co-star with Will Smith, who plays Ben an IRS agent, depressed and guilt-ridden about mistakes he’s made in his past. He decides to make good by helping seven strangers and meets Rosario’s character Emily. He falls in love with her which complicates his plans.

It’s by the same guy that directed Pursuit of Happyness. Take a look.