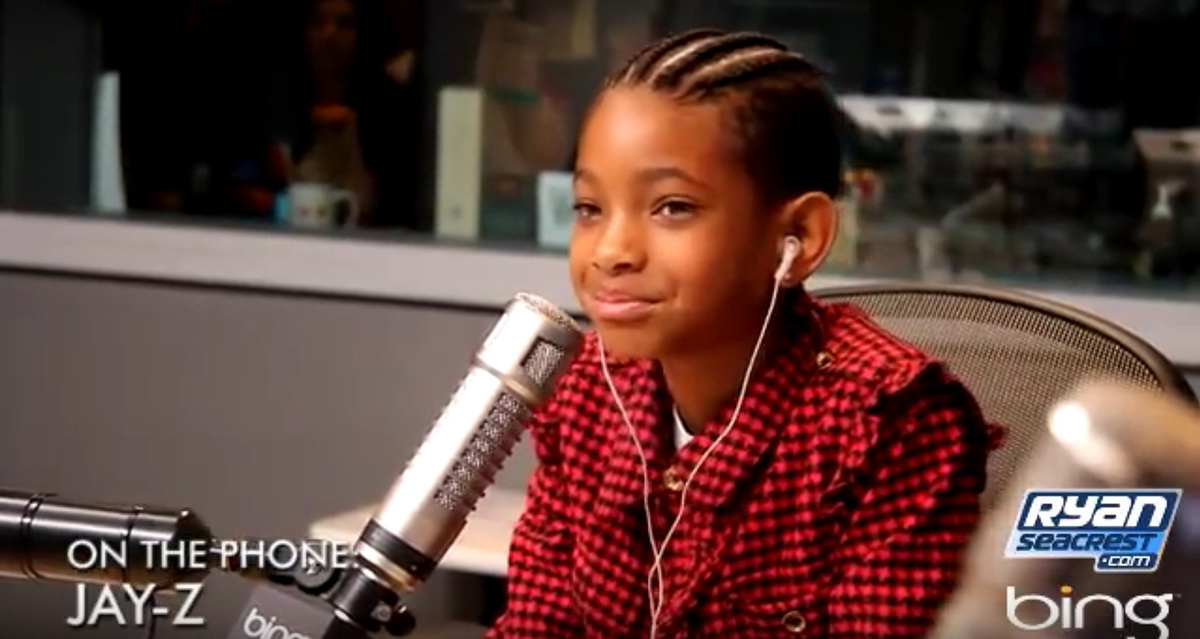 Back in July, Jada Pinkett-Smith, put us on to her daughter Willow’s budding singing talent.  Quick recap: “Let me tell you, she’s 9 years old. I don’t know where that voice came from. She sings like she’s a grown woman. Like she’s been around. I’m like, ‘where does all that experience in your voice come from?’ I have no idea, but she’s something. Music is her thing.”

Now it’s officially the start of a new career. Willow Smith has signed to Jay-Z’s RocNation. This morning, Willow was interviewed on the Ryan Seacrest show. You’ve seen her wild doo in pictures (the one up top is actually an earlier one;) by the way she carries on a conversation it is hard to believe - like everyone says - that she is 9 years old.

“Whip My Hair” is Willow’s first song. Of course, Ryan Seacrest asked her..

What does ‘Whip my Hair” mean?

And how do you know to think that way?

“My mom and me are very strong individuals and I just know that because lots of people, they don’t act like themselves, so they’re not happy.”

During the interview, Jay-Z called in and said “Whip My Hair” was the song that caught his ear. He said he didn’t know it was Willow until after he heard it. Jay-Z talked about meeting Willow for the first time in Japan. He said her maturity level, the way she decribes exactly how she feels, is one indication that Willow is going to be a superstar.

So what’s the plan to start Willow’s music career?

Jay-Z →  “Just to facilitate all of her ideas. As you gonna learn today, you sit with her for a half-hour, you’ll see she’s a wealth of information and ideas.”

I’m predicting big things too. With a creative mind (that hairdo was her idea,) and Will, Jada, and Jay-Z guiding Willow along the way, she’s going to be well prepared for all of the challenges, accolades, and buckets of criticism that come with the music business.

I’m so pleasantly surprised with Willow’s sound and her success. I’m excited to watch her grow and mature into her music and looks. Her talent is rare for her age and it’s only going to get more polished. To know what she wants to do and to be able to do it at such a young age is a blessing. The weirdos all over the net are so ridiculous to say she’s too young and look at Michael Jackson..Yeah, look at Michael Jackson’s life and look at Willows life. COMPLETELY different circumstances..Will and Jada aren’t pimping her for money. Her and Jaden could have grown up to be two spoiled brats not contributing anything to society, but look at them making use of there inherited talents??? WHO CAN BE MAD AT THAT?! I’m so proud of the Smith family. As a black family they have truly overcome so much. Of course most people can’t handle it, but I for one can’t get enough of them. It may not be in their blood or their name but they created their own thrones and now the world sees they are ROYALTY. Black people need to stop being so mad and follow suit!

...wow! she sounds better than Nikki Minaj!  lol this is incredible! i wear my hair back & forth!

Will, jada, Jaden and Willow put White celebrity families to SHAME.
This is, no doubt, A GOOD LOOK for the smiths.
The Kids a GORGEOUS!

How old is she now?

i love you to shaheem hendrix

yo this is jaden not jaden smith willow i love your swag im 9 to i was thanking that i can be a star like you and your brother to i get money like you and you are sexy this like me ok love jaden by ok my number is 13479510923 ok have a good day good by.

What are you doing Lil"jon?

i love you willow smith.

yo jaden smith what are you doing

i love you willow smith can i get your number

i love you willow tell your dad can you call me.

i love you willow

Willow is going to be on the same list with her mother an father as 1 of the greats.

i love willow smith i thank that shaheem hendrix love yo but he this love you to much.

i love you willowb smith i thank that i love you to much but you still got that swagg on you and i never have a girl like you.

i have a lote of money

dont do it hes a bad raper

remember i called you

yo son what the f**k is going on

u are a sweet child
and i love to be like you
:]

You need to come up with another song.Tell Jaden that i said sup.

ant know what,s up because i,m a raper

i love you willow smith

ilove the song girl lov ya

i love you willow smith have a good crismas

what,s up willow that boy shaheem hendrix like you so bad you and him need to go out together can you call him and give him my number do it now and i hope you having a good crismas.

what,s up willow i thes want to say that can i mack a song with you love you baby and you still have swagg are you having a good crismas can you call me about the music this call this number 1347-951-0923 call now ok sweety i love you so much call

sorry willow my sister did that

what,s up willow smith it,s snowing out side what you doing boo

yo don,t talk to willow like that because i can bit you up i,m not know punk homboy ok i knock you out i dont play boy and you gay son don,t ever do that again i,m not playing with you do it again i,m going to give you my number so we can meet and fiht ok and willow i love you i,m this mad at him riht now willow can you call me this is the number 1347-951-0923

i love you i will talk to you when you call

hi you guy are nice people god well bless u

what,s up baby willow smith i love you so much i can this start crying for you i was this playing my DSIXL please call me one more tim

It gives you a chance to make your life better and open opportunities for you to meet the attractive interracial singles and treat you like a Queen. Maybe you wanna check it out or tell your friends.

ok so shaheem hendrix why are you putting your number out there?Im willow’s Bff well one off them me and simi.i have her number and it’s 323-Call-it-why-doyou-want-her-tocall-youget-a-life!call now!!!!!!

I love you willow smith u one and a million

I Haet u ugly u think u sexy but your not

I love u willow smith do u want to go out yes or no pick i love u more than i love my self u the one for me willow u and me are in the million please call me it been a year that we talk i love u and u are in my heart like on some real stuff i help i get to go out with u some day.

willow is soooooooo fly and u better go head girl!

hey willow smith what u doing

u awesome gal do ur thing n make us proud.mchaaaaaw luv ya

Willow Smith I saw your new song on demond

what up willow smith what are you doing

hi willow i admire you and i wish i could see you in person.i have only heard i whip my hair back and forth, but i love it!

why does everyone want to date you? i do not because i am a girl

Whats up willow smith i saw you at the bet awards 2011 you and jaden got awards last night.

willow jaden how yall doin my real cuz is’ shaheem

whats up willow i like you kiss me through the phone

yo willow smith whats up

whats up willow when we gone have a baby together

Good to see real expertise on display. Your contribution is most welcome.