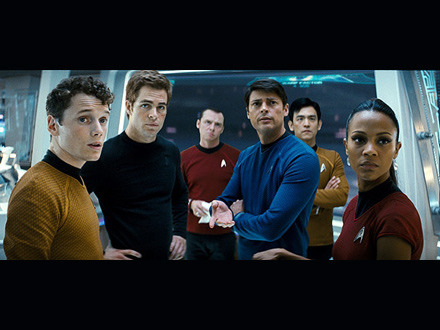 Remember the post about Zoe Saldana being cast as Lieutenant Uhura in the new Star Trek? There were some questions if Zoe was right for the role - at least around here. Well, Vincent Williams at the Baltimore City Paper too.. “I have to say, at first I wasn’t too excited about Zoe Saldana being cast in the role of Nyota Uhura because I didn’t think she had the acting heft or the looks to play the role. Now, this is where my wife rolls her eyes when she reads this, because she thinks I’m going to say it should have gone to Kerry Washington, because my wife thinks I’m obsessed with Kerry Washington. But, see, Kerry Washington would have been perfect, because she’s so pretty, and she has such a commanding presence, and she just seems like she smells like strawberries, and she probably loves Madlib.. I’m just saying” 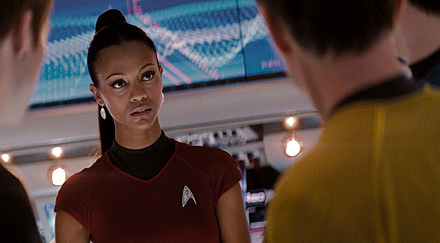 “I’ve started to warm to the idea of Saldana as Uhura considerably, however. The few pictures that have come out from the shooting are starting to give me hope, and the one promotional picture of the actress absolutely nails the combination of beauty and confidence that Uhura needs. Who knows? If Saldana pulls this off, I might even get pulled into the whole Star Trek thing and become a huge fan.”

Yeah, I think the one thing we all missed was this Star Trek is about the early days of the Enterprise crew. In that context Zoe Saldana is near perfect for the role. Here’s the trailer..

make sure to go ‘wide’ for that IMAX experience on your desktop. Ha. Don’t you wish?

Though Zoe looks VERY pretty as Uhura it clearly seems they are trying to take the black out of Uhura. I still hope Zoe does good at the part.